On Our Radar
Faces, places, treasures, and trends that caught our attention 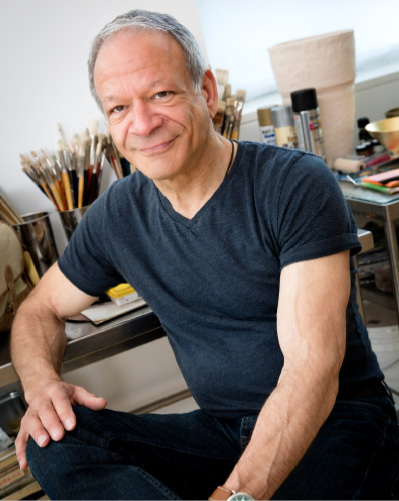 Art of Feast of Art

Jack Rosenberg curates a group show at The Silo Gallery featuring his own paintings and works by Judy Jackson, Ann Mallory, and Elizabeth Macdonald. by beth aviv

Up a concrete staircase in a glass building beside the Shepaug River in Washington Depot lies Jack Rosenberg’s studio. Leaning against a bookcase in a gilt frame is a classically painted, well built man, black hair flowing, chest bare, neck muscles straining, arm cocked, his hand gripping an apple he’s about to throw as an outfielder would throw for an out. It’s Adam, according to Rosenberg, hurling the proverbial apple at Eve. Next to Adam is a still life with oranges.

Jack is in the process of selecting paintings for a show at The Silo Gallery in New Milford. The theme of the show he’s curating is Art of Feast of Art. Susan Purdy, chef, cookbook author and the Silo’s last executive director, had invited Jack to mount a solo show. “The space,” Jack says, “felt more like a temple, there was a spiritual feel.” Because there is also a cooking school at The Silo, he thought, “let’s have a show on the human response to the ritual use of food and drink.”

Inspired by The Silo Gallery’s cathedral-like space, Jack enlisted three more artists to fill the walls and floor with art influenced by, well, the mission of The Silo at Hunt Farm, which is “to cultivate love of land, food and the arts.” Sculptor Ann Mallory, clay artist Elizabeth McDonald, and ceramicist Judy Jackson will join him in a group show. The show opens with a free public reception, complete with light hors d’oeuvres and refreshments, on Saturday, May 13, from 2 to 4 pm and continues through June 25th.

To get ready for the show, Jack has begun pulling out his food related paintings. He’s not sure yet which will make the final cut.  Next to the apple and orange painting is a painting in somber, muddy colors that looks like it belongs on an alter: There is Jesus with his hand up, fingers split bestowing a blessing. Above him are commemoration plates celebrating Kate Middleton’s and Prince William’s marriage. Jack roller-bladed with Kate Middleton when he lived in London and studied at the Prince Charles Drawing School. He met the future Duchess of Cambridge at a charity event where she served him doughnuts. “Not too many people get served donuts by the future queen of England!” he laughs. The title of the painting, April 11, honors the date of the royal couple’s wedding.

Kitty-corner are three enormous panels for Rosenberg’s Last Supper. Diners painted in shades of sky-blue and neutrals have barely sketched-in faces. He plans to place giant ceramic chalices glazed with silvery pastels—made during his very first art class—on a refractory table in front of The Last Supper.

Resting against another wall is a painting reminiscent of Manet’s Bar at the Folies-Bergère. In Rosenberg’s rendition, the Queen of England, herself, leans against the Carrara marble bar, arms spread with exhaustion. She wears a loose, cleavage-revealing black slip of a dress and stares directly at the viewer as if she’s seen everything.  That painting is titled, “WTF, I was Born This Way,” as if she weren’t born into royalty.

Rosenberg pulls out other paintings evocative of the foodie-art theme: In The Original Feast: Mother and Child a serene mother nurses her child who looks askance at the viewer. Sorting out the Guest List uses compositional elements of Caravagio’s Supper at Emmaus and makes reverence to Manet’s iconic Déjeuner sur l’Herbe in which a nude woman dines with well-dressed men in suits in the woods. Rosenberg’s painting portrays a group of well-dressed women in suits around a table, one at a computer, discussing a wedding guest list. Meanwhile, a nude man sits at the edge of his seat looking none-too-happy as he gazes at us, the viewer, with that WTF look. Rosenberg wants to talk about how men have become sex symbols instead of women.

Selecting paintings for the Silo show is difficult because 15 of his pieces, mostly portraits, are currently at the Denise Bibro Fine Art Gallery in Chelsea, Rosenberg’s first New York show. The show titled, “Iconic Vignettes” has portraits of Ruth Bader Ginsburg titled RGB—her face in triplicate, a lacy scarf under her chin; next to the judge’s portrait hangs a modern interpretation of a 15th century aristocrat—his face doubled—with a lacy ruffle around his neck—titled A Maecenas. There are also iconic, yet iconoclastic, portraits of Jackie, Maya Angelou, Queen Elizabeth, and the Pope.

Rosenberg hails from Oak Park, Michigan, a humble suburb just north of Detroit’s Eight Mile Road. He doesn’t remember much of his childhood, his time at Michigan State University, his time in dental school at the University of Detroit and then in a graduate program in oral surgery at Tufts, after which he moved to New York with his wife and two children and opened a midtown practice. Soon after, he was divorced.

In 1986, he began tinkering with computers and helping people set up their systems—which led to a brief career in computers, which then led to his building the British on-line fashion website, Net-a-Porter, in the US. When the company asked him to take over expansion into Singapore and Hong Kong, he quit, moved to East Hampton with his partner and eventual husband, John Michael Murphy, an interior designer.

Rosenberg took his first art class – a ceramic class in Amagansett – where he made the chalices that will complement The Last Supper in the Silo exhibition. He soon tired of “round” and pursued “flat” atelier training at the National Academy of Art in New York, the Florence Academy of Art in Florence, and then the Prince Charles Drawing school in London.

Prior to eleven years ago, Rosenberg had taken no art classes – not even in high school or college. With no training, he dove obsessively and passionately into painting. His work continues to evolve from the classicism he learned in Florence and London to the freer, more painterly style he’s developed. He pulls out six panels and shows me how he builds a canvas – the same lesson he gives when he teaches a painting class at the Washington Art Association. First the wood panel, then layers of gesso, then an application of an imprimatura – the prime middle value of the painting – for example, Vermeer used green; Rembrandt used a warm red. Next, he draws a grid and sketches an image in pencil, applies Graislle – a gray scale undertone painting of the image; and finally, layers of color. For Rosenberg, though, that’s not the end of the painting – but the beginning of the fun.

He keeps painting—distorting, amplifying, dissembling, doubling and tripling the faces, flattening the picture plane, integrating the foreground, blurring images, and adding whimsical elements – like bicycle handles for his raja or an inverted pop-corn bag holding up the mantilla of his Velazquez inspired movie buff or a Yankees cap on his Rembrandt inspired merchant.

Rosenberg’s studio reflects the meticulous care he takes with his paintings where windows cast shifting frames of light over the concrete floor. Everything is shiny clean, in its place. Brushes by size in stainless steel canisters on a stainless steel table. Paintings displayed and grouped in bins. A round table designed by his husband with fitted chairs that disappear under the table when pushed in. Rosenberg serves us espressos, black, in tiny glass cups. He talks about how he paints even when doesn’t quite know where he’s going. By diving in. At the end of a series he may step back and ask,  “What’s here? What does it mean? Where do I go next?”

And then he grows philosophical. “When you look back over life, there are glimmers of insight.” During his sophomore year at the University of London he took a break from organic chemistry, physics, and bio-chem to study literature, the humanities, and art history; he got “gob-smacked” going to the Globe Theatre in London and the Royal Shakespeare Theater in Stratford. He loved Europe and art and this new sensibility of culture. But he returned to his science major back in East Lansing.

After years leading a fairly proscribed life as a married man, a father (and eventually grandfather); as a dentist, and an innovator in the dot.com world, he quit, moved to the beach with Murphy and began making himself into the artist he has become. After a couple of years in East Hampton, Rosenberg and Murphy again moved, this time to Litchfield County.

“It all comes from the subconscious,” he says. He responds to what he sees and internalizes. Sometimes he gets lost. He was lost for a year and a half when he didn’t know what he was doing. But he just kept showing up, working and working. “That’s where magic happens,” Rosenberg says. “At the easel when you just show up.”

From May 13 to June 25th, art that evokes an edible feast will fill the space at the Silo. Jack Rosenberg’s paintings and chalices will be on display along with the three dimensional work of Ann Mallory, Elizabeth McDonald, and Judy Jackson. Ann Mallory is widely known for her hand-built and subtly glazed sculptural work – some resembling stones or wrapped bundles or monoliths. She’s also known for the dinnerware and serviceware she designed for clients like Neiman Marcus, Donna Karan, and Crate & Barrel.  Clay artist Elizabeth MacDonald creates tactile and atmospheric scenes out of glazed tiles; she also makes sculptural pots and bowls – perfect for filling with fruit or vegetables. Judy Jackson makes stoneware used for cooking and serving food, dinnerware, bowls, planters and vases in silky and lustrous tones: wheat, brown, mustard, olive, yellow, white, black, cream, gray, grape, periwinkle, sea green, weathered green and cobalt. Her work is created in her studio at Litchfield county and at Tribeca Potters in NYC; sold at food52.com, West Elm, and many other shops, and can be found at restaurants all over the country. Jackson’s vision translates to vessels that have simple, strong shapes and ethereal and earthy qualities.

Beth Aviv, a writer who lives in Brooklyn and Bethlehem, writes fiction and non-fiction covering topics from the arts to the Arctic.  Her most recent work has appeared in New Letters, The Michigan Quarterly Review, Raw Vision, and Salon.